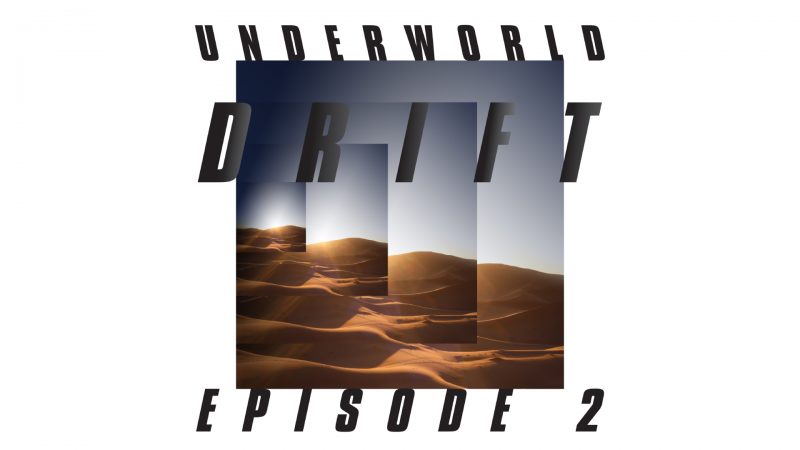 “The Drift experience is one of a torrent of ideas, with its own internal logic… (where) instinct, experience and chance lead to a strange kind of harmony.” Mojo

“Hugely ambitious and unimaginably relentless… each weekly release thematically bleeds into the next, creating a weaving storyline that threads through the whole. Watching and listening to this ever-evolving project feels like unpacking a Russian doll.” Q

Underworld have announced details of ATOM – the film and audio resolution to the second episode of their on-going DRIFT series. It is released on Thursday 7th March 2019 at 6pm GMT, via their website and all major digital platforms.

If DRIFT Episode 1: DUST was the spark and surge of a journey beginning, ATOM explodes skywards before splitting off to explore multiple new paths. This time, the journey begins with a minimalist, hypnotic small hours techno glide (Appleshine), heads out past the emerging shoots of a spring green pastoral England (Molehill); onwards and upwards with 15 minutes of deep and occasionally discomfiting analogue machine music (Threat of Rain), down the tarmac of Europe endless all through the night (Brussels); crossing continents to wake up at a prismatic electro-carnival in the heart of New Orleans (Soniamode) before finally stretching out into mesmerising 47 minute long head trip that returns to the beginning of the journey (Appleshine Continuum recorded with Australian trio The Necks). It is unpredictable and uncompromising. It’s uniquely Underworld.

Underworld began their year long DRIFT project on November 1st 2018. A public experiment in creativity and possibility, Drift sees the band releasing material on Thursday each week via their website. During each DRIFT episode, music and film are often created and mixed reactively to the previous week’s work, and the material collected together to form DRIFT episodes. At the end of each episode, all parts are fused together into a single resolve told in music, images and words. Between episodes, the band release previously unheard archive material, remixes and curios.

DRIFT Episode 2: ATOM is available via underworldlive.com. The audio is available through all good streaming/download platforms. The next DRIFT episode begins on March 28th.

Underworld were recently announced as the closing act on the main stage at Latitude Festival on Saturday 20th July. A full list of confirmed Underworld shows for 2019: