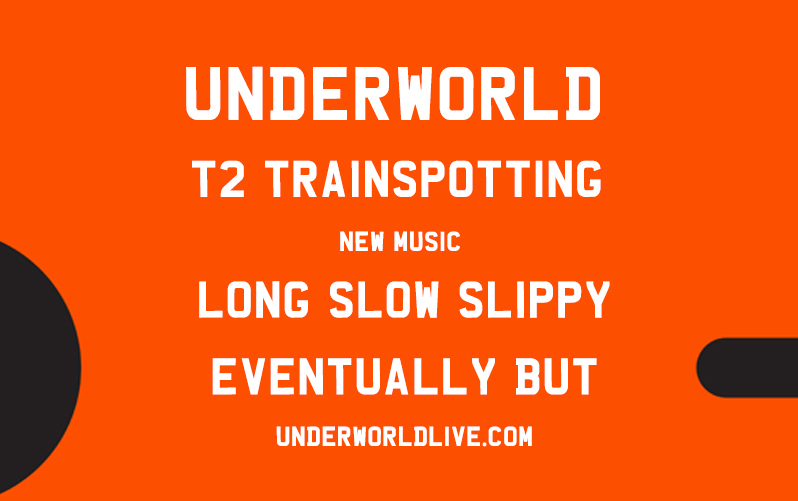 Trainspotting. Twenty years have gone by. Much has changed but just as much remains the same….

You could say that Underworld are part of the DNA of  Trainspotting – a story that started with the directors cut of the original film, and continues today with the just-finished sequel T2 Trainspotting…

“On the first film, the heartbeat, the river run, was Underworld’s DUBNOBASSWITHMYHEADMAN, and then the needle-drop of BORN SLIPPY—but what a needle drop!  And on  T2  it was Rick Smith from Underworld agreeing to score the film and to help Jon Harris and I with the whole soundtrack—original score and needle-drops.”  Danny Boyle

Twenty years on, Rick weaves a score to the new film from tracks, old and new, original and reconceived, which include a new piece by Underworld (Eventually But)  and a reimagining of  Born Slippy (Slow Slippy).

“One of the Greek philosophers, can’t remember which one, thought that whatever you say about something, the opposite is equally true. The word he used for this tension was ‘fire’—and that’s what Trainspotting had. It was in Irvine’s book and it was in Danny’s film, in the characters and in the music. 20 years on, I’ve loved writing and collecting music for T2 and can only hope that it catches in the same way.”  Rick Smith.

On one side is the full-length version of that reimagined  Born Slippy (Nuxx) –  Long Slow Slippy   (an edit is included on the official soundtrack album). On the other,  Eventually But  –  the first new Underworld track since last year’s album  Barbara Barbara, we face a shining future. This full version is only available on this 12” and is not included on the soundtrack album and is not available digitally.

The 12” is pressed onto 180-gram heavyweight vinyl cut at half speed to be played at 45 RPM, in a die-cut sleeve, with all artwork by tomato. Available exclusively at  underworldlive.com.

Catch up on the original Trainspotting in just 4 minutes, cut by Danny Boyle, soundtracked by Born Slippy (Nuxx).

The 20 years between the two films saw Underworld, Rick Smith and Danny Boyle continue and evolve the relationship, on projects including  The Beach,  A Life Less Ordinary,  Sunshine,  the National Theatre’s  Frankenstein,  the  London 2012 Olympic Opening Ceremony,  Trance and now,  T2 Trainspotting.