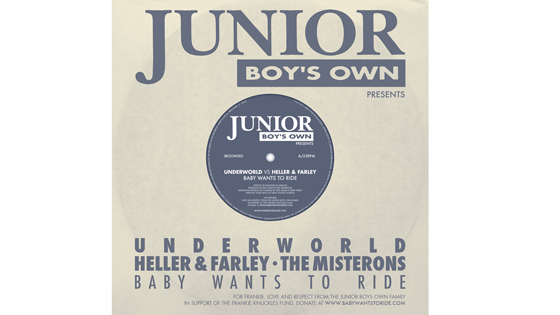 In celebration of Frankie Knuckles’ life and music, two of Junior Boys Own’s cornerstone acts – Underworld and Heller & Farley – have joined forces for the first time to record a version of the Chicago classic “Baby Wants To Ride”.

Released digitally and on limited edition 12″ vinyl. Proceeds from the single will go direct to the Frankie Knuckles Fund (part of the Elton John AIDS Foundation).

By ordering direct, you ensure that the proceeds from the single go direct to the charity, without any retailer margin deductions. The limited edition of 1,000 vinyl 12”s and the digital bundle are available at babywantstoride.com as “Pay What You Want” (subject to a minimum of £12 plus shipping for the vinyl and £3 for the digital bundle).

On the continued influence of Frankie Knuckles:

‘My relationship with Frankie goes back a long way.
Twenty-five years ago, Frankie championed the early
music Pete Heller and I made and many of the first releases
on Junior Boys Own. He helped turn a group of suburban
London music fans into DJs and producers who could travel
the world, simply by his patronage.’
Terry Farley

‘As the creator of house music we owe Frankie
a huge debt. Karl and I have always seen Frankie as
the source and, as Underworld, we’re always swimming in his river.’
Rick Smith (Underworld)

‘When difficult decisions had to be made at the label,
I’d often ask myself, “What would Frankie do?’ This meant
we should approach the problem with love and
respect for the music as our first concern.”
Steven Hall (Junior Boys Own)

Frankie Knuckles Fund Fund was established by Defmix and the Elton John AIDS Foundation in Knuckles’ memory, following his passing on 31st March 2014. The fund receives donations for the charity’s work with men at high risk of HIV in Africa as well as African communities in the UK, and African American communities in the U.S.A. For more information on the work the charity does click here.