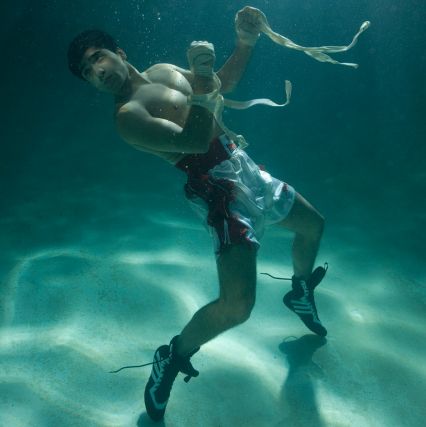 This is stunning. Literally and metaphorically.
The Independent

Beautiful and painfully tender
The Guardian

For us, the Underworld sound is one that perfectly matches the ambition of this show. From dark, throbbing bass-driven tracks to huge, cinematic, sweeping numbers, no other band could compliment the full emotional spectrum of the piece. Little lives with big dreams, bruising physicality and euphoric experiences are all given the Underworld treatment with tracks that span the band’s entire illustrious career. We were so inspired, we even had to name the show after one track!
Steven Hoggett, Creative Director, Frantic Assembly

If you’ve been confused by repeated mentions of the Oblivion With Bells track in the press over recent weeks, we thought we’d give the full story. The track is one of the inspirations behind a theatre show at the Edinburgh Festival put on by Frantic Assembly and the National Theatre of Scotland. The hugely acclaimed piece of physical theatre, centred around boxing and primarily set in a boxing ring, is sound-tracked solely by Underworld (even including recent single Scribble). It’s already won a Fringe First Award and everyone at Underworld Live is massively proud to be associated with it.

Beautiful Burnout heads out of Edinburgh for limited runs in Glasgow, London, Glenrothes and Sheffield. Coincidentally, the London run opens the week that Underworld’s sixth studio album, Barking, is released. All dates and ticket information can be found here.