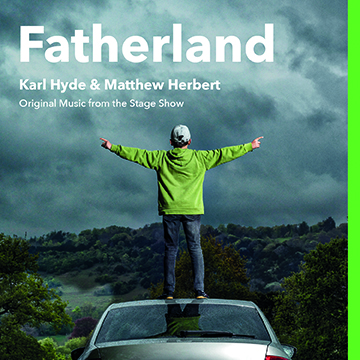 Fatherland is a bold, ambitious show about the complexities and contradictions of fatherhood; a vivid, urgent and deeply personal portrait of 21st-century England at the crossroads of past, present and future. The script is based on recorded interviews that took place in Corby, Stockport and Bewdley in 2015 when Graham, Stephens and Hyde undertook a road trip connecting their home towns, gathering stories of fathers and fatherhood from family, friends, and strangers.

Read more about the play here.

Fatherland (Original Music from the Stage Show) features versions of pieces that will be interpreted by the cast of Fatherland (the lyrics are taken from the same original source material captured on that road trip) yet is its own distinctive piece of work – an odd, affecting collection of elegiac, biographies. The album comprises the original recordings made through this unique collaboration between two of British music’s most innovative artists, Karl Hyde and Matthew Herbert.

“Fatherland is all about the collecting and re-telling of stories. For the last thirty years, that’s what I’ve done with Underworld. I’ve sung verbatim the stories I’ve picked up from the street. Here was the possibility of having complete stories about people we knew, rather than found fragments from strangers.

“I invited Matthew Herbert to collaborate as I love his music and the way he thinks. He works incredibly fast – as do I. Early on, we decided we wanted to create our music from the sounds of objects that reminded us of our fathers and our childhoods. That could be a football bouncing or a set of car keys, a whistle or the sound of a car engine purring. Anything that evoked the idea of childhood and of our fathers. All of the sounds on the record came from digging up those memories.

“The lyrics are taken from the script. When Matthew and I began, we took stories that jumped out at us from the script and built the tracks around them. I’d sing the words verbatim, inspired by the sounds Matthew made – all the ums and ahs are used as they were in the original conversations. As we began translating these ideas into songs, it became very clear that we were making a kind of 21st century folk music.”

“Working with sounds rather than traditional musical instruments allowed us ways not only into new textures, but also to add a layer of storytelling that I think is really useful in this kind of context. For example, we used a pick axe and spade to make the main organ/keyboard noise in Perfect Moment that created both the odd harmonics that were useful in the song writing, and also helped us to remember the manual labour of our grandfathers.

“It’s been rewarding collaborating with Karl and the team on a version of a musical that can accommodate these sounds that manage to sound both familiar and alien at the same time. The cherry on the cake was being able to form that new language with Karl, whose impeccable experience shaping words and melody meant that we rapidly found a rhythm that hopefully enabled us to get out the way quite quickly, allowing the audience to listen to the stories themselves.”

Fatherland is now open at Lyric Hammersmith and runs through 23rd June 2018. The album is available now.